Nikko is Where “It” is At

You might remember friend and bandmate, Thom, coming with me to a cabin in the Shizuoka woods a few episodes ago. Well, another ex-bandmate with the same name but no H and British   also recently asked about akiya. We all played in Retch together. Prior to that, we were in Darkcorpse with yet another Tom (who went by Tommy). Funny how that works.

British Tom is in Vancouver these days, so instead of asking about acquisition, he relayed some positive anecdotes about his akiya experiences. Some years back, he found some who had bought an abandoned river retreat in the wilderness of Nikko in Tochigi, and converted it into a minpaku called Zen Hostel. According to Tom’s impeccably posh taste, the place was an absolute gem.

Tom’s an extremely reliable critic, so I view his recommendations as a sure-shot. As I hadn’t been to Nikko for maybe 17 years, and enjoy secluding myself in the woods, I took his advice and went to contact Zen Hostel.

But there was a problem: There is no Zen Hostel. Not anymore, anyway, or at least that one.

There is a different Zen Hostel under construction as we speak, right near the old one.

There’s also one in Nagano. It has not one, not two, but three Facebook pages.

But there were traces of my Zen Hostel on Japan Travel and Japan Today, so it at least had existed.

I’m being a bit facetious as it wasn’t really that hard to track down. Sure, domain registration and social presence are a bit wonky, but this is Japan, the land of atrocious digital management. Fittingly, a simple Google search for “Zen Hostel Nikko” produced a lot of old or irrelevant content. Confusingly, it also provides a big, bright listing for Zen Hostel’s current iteration, Earth Hostel: The Riverside. Success!

Now with branded resources to examine, I got to work and quickly loved what I saw! Earth Hostel has four major themes at work: the river, the secluded property, wilderness exploration, and homemade food. All of these resonate very strongly with me. I enjoy ill-advised solo trips, and retain the cooking habits I developed when I was vegan. It was a no-brainer to reach out about heading over to experience what they offer.

In our communications, the owner and sole staff, Scout, got back to me quickly. He also replied with segmented quotes with relevant responses in regular text immediately below. “This is gonna be great,” I thought to myself.

After some back and forth, we determined a weekend for me to book a room. Nikko’s a bit far by train, local or shinkansen, so I opted for the local route to take in some of the sights. Bullet trains are wonderful, and also provide excellent views, but I find local trains more charming, and opted for that route.

Another thing I have always loved about trains, but especially now, is the opportunity to get shit done. It’s a combination of the repetitive sound of the train, the changing scenery, and the anonymity of passenger-dom which lets me focus.

With the ascendency of remote work,  this makes sparsely populated trains even more appealing. Sitting in an empty booth next to an open window with fresh air blasting your face is an ideal environment to get in the zone.

Active environments have always bugged me because they’re full of distractions. Even if you’re adept at working in that environment, I’m pretty sure you’d be more productive in a calm one.

Slip Back in Time

But as I said, though, it’s a hike: The total time from Tokyo Station to Nikko Station was about 3 hours. I didn’t plan the trip precisely, so you could easily arrive in less time, but I live adventurously, so whatever.

Thickly forested, heavily mountainous, frequently misty, and perpetually in the golden hour, Nikko has a very unique atmosphere. Pulling into the station, I was very distinctly aware of this ephemeral quality.

The closest station to the Earth Hostel is Nikko, but that doesn’t mean that it is actually physically close. Scout offers shuttle services to and from the hostel, and he kindly suggested a time to pick me up at the station. Sure enough, there he was waiting right outside of the gate with his taxi-yellow hatchback!

I threw my gear into the back and sat shotgun for the 20 minute ride to the hostel. Sometimes this is considered an overly-aggressive move by a customer, and I’m usually hesitant to do so. However, I find that it works well in speaking with experienced owners of akiya.

We started talking almost immediately. First about how I had discovered the place, which I had only briefly outlined in our emails. Over the course of my 2 day stay, Scout proved his impressive powers of recollection. However, on this initial conversation about British Tom he wasn’t able to recall. When I mentioned Zen Hostel 2 days later, though, Scout seemed to remember. Context is everything, folx, don’t forget it.

Also, we got to chatting about metal musicians in Japan. He totally knew about Napalm Death’s long history with this country, which was super cool.

Arriving at The Earth Hostel

The ride was a winding one. It began in Nikko, then a forest jaunt, then through hilly rice fields, and finally along the Kuro River where Earth Hostel stands.

Much like riding trains through Japan, driving also provides a magnificent glimpse of the many climates of the countryside. I won’t recommend driving just for driving’s sake, having such scenery accompany you to your destination is nice.

Finally, after a day traveling in trains and cars, across plains and mountains and forests, we pulled up to Earth Hostel. It which appears abruptly around a bend and stands humbly between the Kuro River and a deep, evergreen forest. This outpost vibe, if not DIY castle, hits you immediately. I’m also willing to say that most will be excited about exploring it. 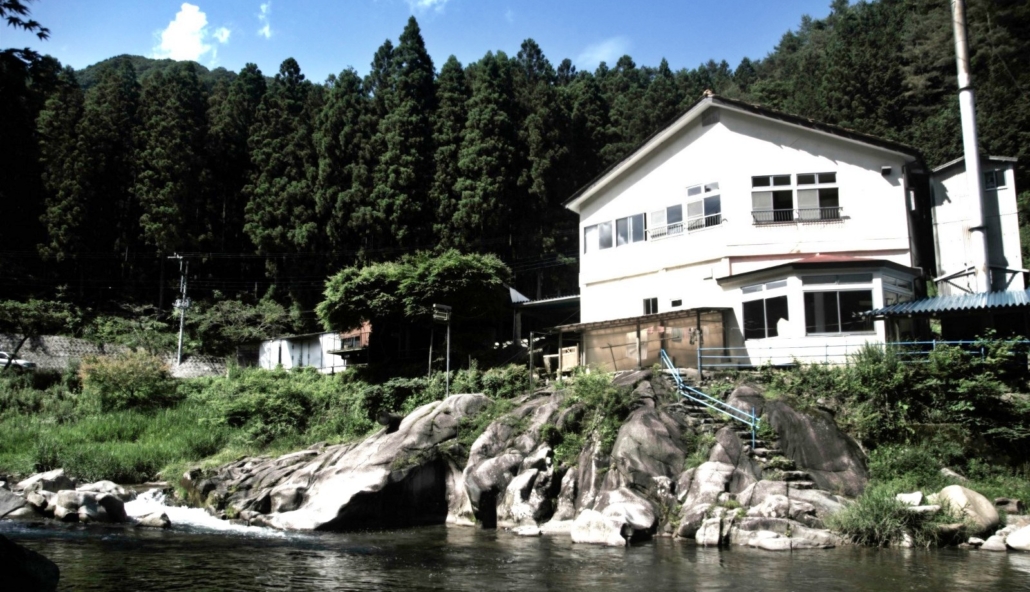 Finally, after a day traveling in trains and cars, across plains and mountains and forests, we pulled up to Earth Hostel. It which appears abruptly around a bend and stands humbly between the Kuro River and a deep, evergreen forest. This outpost vibe, if not DIY castle, hits you immediately. I’m also willing to say that most will be excited about exploring it.

A Former Akiya in Nikko

The main building itself is quite large, and has a relatively unique layout. The first floor opens up via sliding glass doors to 2 bathrooms, a door to the kitchen, a walkway to 2 gargantuan shower rooms, and a stairway.

The shower rooms are impressive, with their 5 meter ceilings and view of the river. There’s a huge wooden partition splitting it into 2 separate shower rooms. That partition is cut to fit the stones jutting out of the floor, a natural feature the building was built around.

Originally, this was an onsen as well, but the baths are not filled due to the high cost of maintenance. However, it serves its purpose, is really cool, and whatever there’s a river.

A Former Akiya in Nikko, Cont.

The second floor houses most of the sleeping quarters. Some are private, some individual or family rooms with futon, and others are just bunks. It also has a banquet hall that doubles as a lounge with stage and public desktop.

Opposite the entrance of the main building, there is a large wooden veranda overlooking the river. Here, there are 2 refrigerators, 4 tables and benches, bluetooth speakers, and a grill. I immediately thought this is the spot to eat all of my meals and listen to the river.

There are also 2 train cars on the property that have been converted into private standalone rooms. I’ve stayed in similar situations around the globe in retrofitted vintage Airstreams, and always enjoyed the experience. This time around, I stayed in one of the private tatami rooms, but bet the trailers are great.

But let’s get to the meat of this story: The River! The first time I went for a swim, I was actually too excited to get in that I overlooked the staircase, and instead just awkwardly scaled a small cliff that runs along the edge. This ultimately worked just fine, though I highly recommend the stairs.

Although I’ve inexplicably corona-evolved to take cold showers this year, that’s not to say that the initial shock of cold water has subsided much at all. This river is much the same — Its a river, so if it wasn’t brisk I’d be a bit concerned.

Once adjusted, though, well, again, its a river. There’s a noticeable current at some spots, considerable variation in depth which goes up to my chin, and rocks and boulders of different sizes strewn about. The river gurgles incessantly, the birds sing intermittently, the trees creak with the wind. The smell of soil, cedar, and whatever you call the scent of fresh running water permeates the air. Occasionally, and especially if you dunk your head, you’ll taste the cool, mineral-y water as it drips down your face.

Its a wholly refreshing and invigorating experience. Like many of the experiences I have had exploring akiya and inaka, it highlights one of the more difficult to enunciate issues of modernity that corona has brought to the forefront: visceral sensory interaction, or lack thereof.

A suit, an office, a car, an apartment. Everything associated with modern, metropolitan life has provided those lucky enough to have them with numerous benefits. However, with Coronafear, I suspect something gnawing at many people is the absence of experiencing the full range of human sense.

It might sound minor, but swimming in a cool river , hiking a forest trail, or biking in blistering heat  provides valuable sensory experience. To recognize our existence within a greater, natural ecosystem on a speck of dust in a massive cosmos.

Or at least that went through my head that night as I floated alone on the river gazing at the stars above.

Just at face value, Earth Hostel provides an exquisitely secluded experience to patrons, but when considering that he did all this with an akiya, its impossible to not start imagining what else might be done with properties like this that are scattered across Japan’s multifaceted landscape.

Note: I notified Scout that I would be writing about Earth Hostel, to which he consented, however there is no official — financial or otherwise — relationship between his operation and Akiya & Inaka.